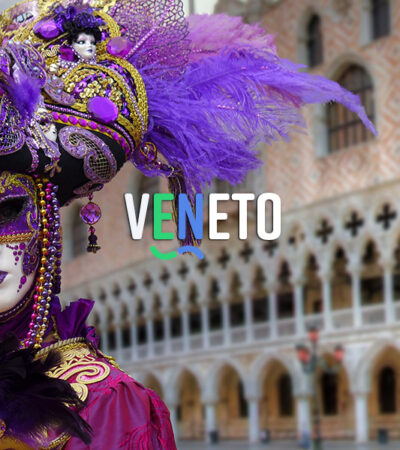 Veneto is a region to be discovered, full of wonderful views and places to visit. From cities wrapped in a special aura, where you can breathe that particular scent of ancient, authentic; to the pure green landscapes it offers in places like Fregona, with its Council forest; or like the Revine lakes; or like the fraction of Lake Garda that crosses it.

And then there is Venice. Magic. This is the right word to define it. It is a timeless place, where you return to fall in love with her and with life more and more. It is a land of timeless lovers … home of Giacomo Casanova, known for being a skilled lover, one of a kind in conquering women…Located within a lagoon of the Adriatic Sea, it is not made up of roads, but of canals.

Grand Canal, Cannaregio Canal, Giudecca Canal. To cross it spectacular bridges that allow you to observe magical panoramas everywhere…on one side the gondolas, on the other Gothic and Renaissance buildings.

Its carnival is known around the world for being one of the most majestic and spectacular, among ancient nineteenth-century masks that are scattered like wildfire throughout the city, where mystery and liveliness lingers. Piazza San Marco, the Rialto Bridge… is a unique city, and for this reason it hardly does not enter the heart of those who visit it.

The islets of Murano, where the art of glass is cultivated; and Burano, one of the most colorful places thanks to the fun little houses. But as if the majesty of Venice, the queen of the region, were not enough, there are countless other fascinating places. There is Verona, with Juliet’s house, the place where the famous Shakespearean tragedy is set, also favoring the region the primacy among the territories where great stories between lovers have been lived…; with the Arena, one of the major Roman amphitheaters; with Piazza delle Erbe, always charming and elegant.

It is difficult to leave the Veneto, a superb region … and perhaps for this reason, it is said that there are those who have not really abandoned Veneto, not even as spirit! This is not just any ghost but that of Princess Sissi. She has been wandering around the town of Belluno for more than a century, as many say: some after seeing shadows, some after seeing female silhouettes. The story has aroused a lot of interest, and for this reason it has been the subject of studies among various experts. Veneto is also a mystery …

And then there is Padua, with its majestic palaces, as well as Treviso, a breath of fresh air in the middle of the Veneto, from which it is possible to reach the sea at Jesolo directly, for those who love cycling, via a track, the ‘Greenway’. Jesolo has always been a popular destination for summer holidays, boasting one of the largest beaches in northern Italy.

Fun, offers days by the sea and to top it off, aperitifs and dinners with breathtaking views. What is certain is that by going to Veneto it will not be possible to remain indifferent … and not even fasting! There are a variety of dishes, many related to the lagoon and marine environment: first of all the Baccalà alla Vicentina, made with dried cod, onion, flour, milk and oil, usually served together with polenta.

Absolutely to be tasted the famous “bigoli alla bassano”, originally from Bassano del Grappa, characteristic homemade “spaghetti”, very rustic and tasty … But don’t let it be that you are a teetotaler sitting at a Veneto table! In fact, the characteristic Spritz will never be missing, whether it’s an aperitif or dinner, whether it’s to cheer yourself up after a bad day, or to celebrate a success: the Spritz is the answer to everything!

And if you don’t like it, there is still a huge wine selection: from Amarone della Valpolicella to various sparkling wines and prosecco produced at km 0. As the Venetians say “Dio te varda da un magnador che no beve”, God beware of one who eats and does not drink.

Never forget that for every Venetian its province is the best, but compared to the rest of Italy, the entire region joins a common front to assert its authority …

Veneto is the region where to cultivate love, it is poetry and timeless magic, it is a riot of colors, art,poetry …

“And when we leave Venice we find that our watches have trouble returning to real time again.”
(Mieczysław Kozłowski)

Next
Lombardy: between antiquity and innovation
September 2, 2020
Previous
ON THE EDGE OF THE CRATER
August 13, 2020